Hopscotch is a popular child’s game whereby a player tosses a small object such as a stone, onto numbered squares drawn on the ground and then hops or jumps through the spaces to retrieve the object. It is can be played alone or with several players.

Players: Up to 5 children can play
You need: An object such as a stone.

Hopscotch around the world:
Hopscotch is played throughout the world, sometimes with slight variations. This is what it’s called worldwide: 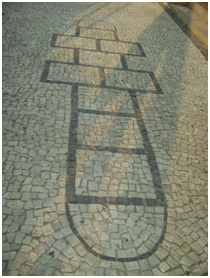