Snakes and ladders, known originally as Moksha Patam, is an ancient Indian board game from the 2nd Century AD.

It is played on a game board with numbered, gridded squares with two or more players.  A number of ladders and snakes are pictured on the board, each connecting two board squares.

Players: Up to 4 can play at once
You need: A small object for each player and a dice.

The game is a simple race based on sheer luck. The historic version had its roots in a morality lesson, whereby the player's progression up the board represented a life journey complicated by virtues (ladders) and vices (snakes). 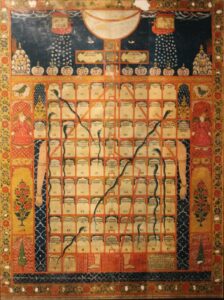