Our first Space2b designer profile is Maoko Carroll of Jamanapo, whose beautiful bags bring a touch of vintage Japan to the store. Maoko’s designs incorporate colourful Japanese silks and denim, often including a single button or contrastive hand-stitching that adds character to each one off creation. 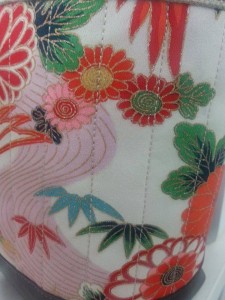 Maoko was first exposed to this craft while growing up in Japan, watching her mother sew and observing the different fabrics. However, back then, Maoko was less interested in the traditional Japanese materials than she was in Western-style dressmaking. Now, Maoko weaves together the east and west, traditional with modern, to produce unique bags and satchels, lovingly handmade in Melbourne.

She lives in Kangaroo Ground and is constantly inspired by her natural surroundings. However, the fabrics Maoko uses connect her with Japan. Each bag is a one-off creation, made with materials such as indigo cotton from kimono and fabric from workers’ aprons. 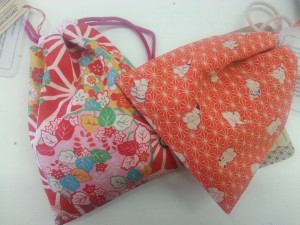 In Japan, it is believed that each baby is born with a red thread on their little finger, and that their partner in life is born with the other end of the thread. Maoko beautifully ties this Japanese tradition to her products by sewing a button onto each bag using a red thread. This represents her hope of a destined partnership between a bag and its owner.

Maoko has been a great supporter of Space2b. She loves the shop’s atmosphere, and told us after her visit to Space2b, that you feel welcomed when you come in, and come out feeling happy. One of our first window displays featured the Jamanapo bags and the story behind them. Maoko was very impressed by how we transformed the empty window into a space for storytelling. It is very satisfying for one of our designers to commend all the hard work that goes into Space2b and to remind us that we are doing  “something worthwhile and very special.”

Maoko’s products have been some of our best-selling items since the start of Space2b, and a new range of Jamanapo bags are currently in store.